Let me first introduce to you ‘The Chef’ 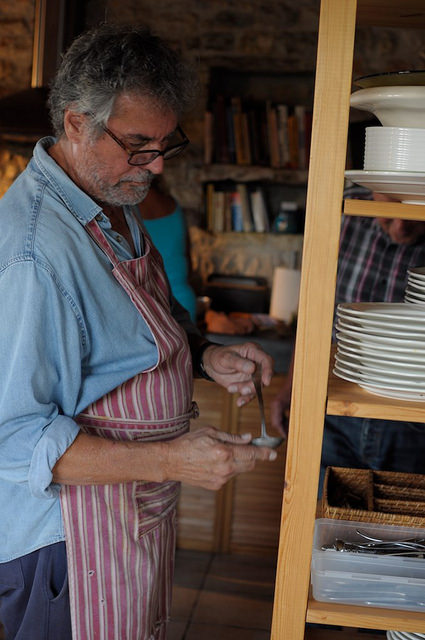 Born and raised in Athens. Has a degree in Hotel and Restaurant Management from “Ecole Hoteliere” in Rhodes. Went to San Francisco in 1979, where he worked for the Hilton Hotel for 16 years in Food and Beverage. After that he opened his own restaurant. Returned to Greece in 2003 and lives in Kýthera since 2005. 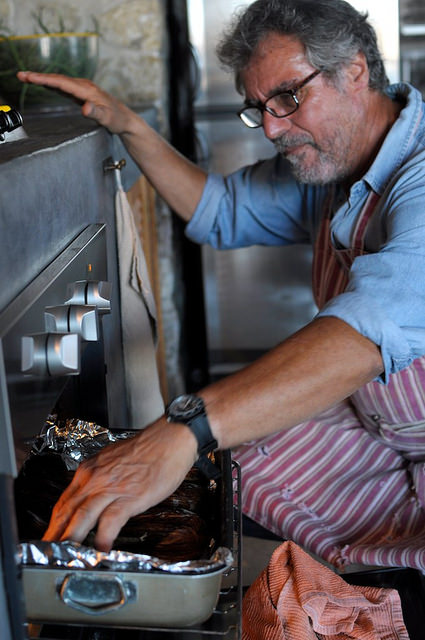 How it all started, The Cooking Workshop

Very spontaneously. We wanted to organize something new and something typically Greek, especially for the guests of our olive picking weeks ( olive picking weeks from Xenonas fos ke choros yearly in november). While picking olives with guests suddenly a new idea popped up. Why not show them how this fantastic olive oil can be used in practice. And before we knew it the idea of a cooking workshop was born. 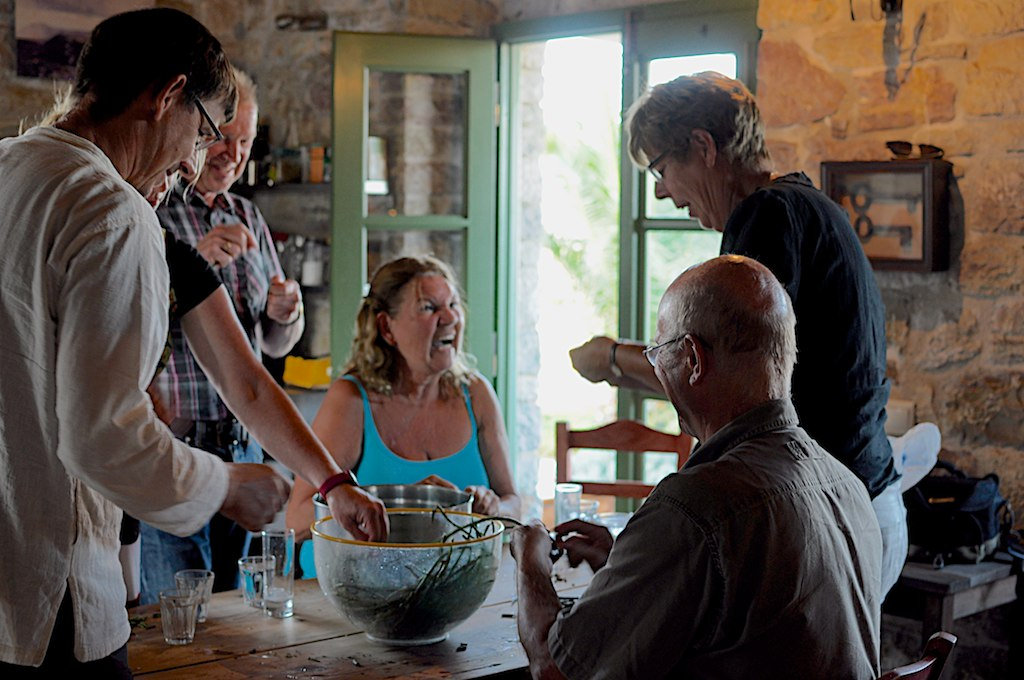 But who was going to lead the workshop? Immediately Takis came to mind. We knew him from our regular ‘Friday evening get togethers’. The last years, in the Winter, we use to meet up every Friday evening with a group of friends somewhere on the island. Everybody brought something to eat, of course homemade. During this evenings, while we were eating, drinking, laughing, playing games and watching movies, Takis often spoke about his work and his dream: cooking workshops on Kýthira. So in 2010 we invited him to come over once a week during the olive picking season and prepare fantastic Greek meals together with our guests. 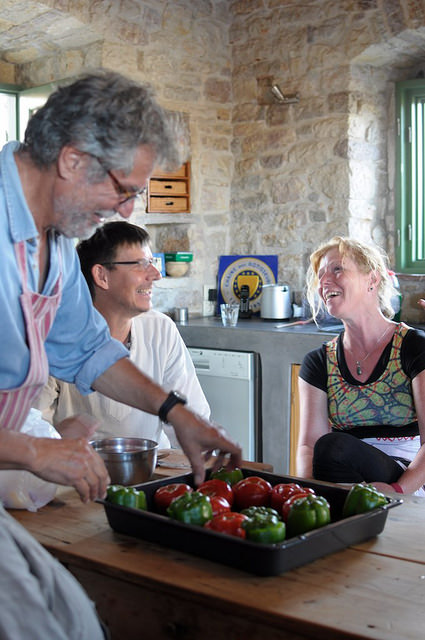 During the very first cooking workshop Takis became very enthusiastic. After a few glasses of wine, a lot of chatting and laughing and one hour without working, I taped Takis on his shoulder and asked him: ‘aren’t you forgetting something?’ He looked at me and started to smile (at which he is very good) and immediately he realised that 10 hungry guests were waiting for food and a cooking workshop. 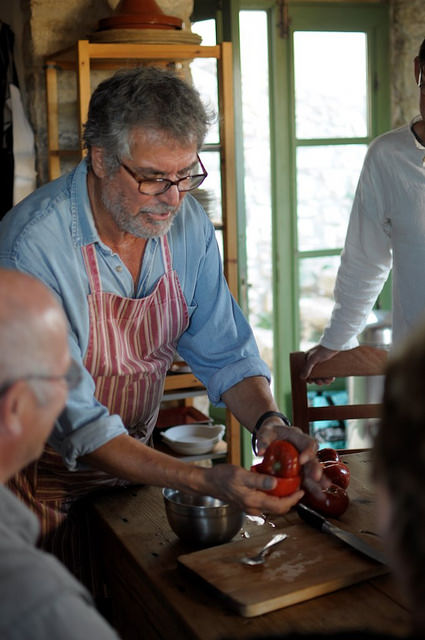 During one of the workshops we made ‘jemista’, peppers and tomatoes stuffed with rice and herbs. A typically ‘slow cooking’ meal. After an hour and a half in the oven it should have been ready. Takis checked it and said: ‘just another 30 minutes’. So we took another glass of wine and waited. After 4 times checking and a lot of wine, dinner was finally ready to be served! Slow cooking in Greece sometimes becomes a midnight dinner… We didn’t mind because the food was delicious. 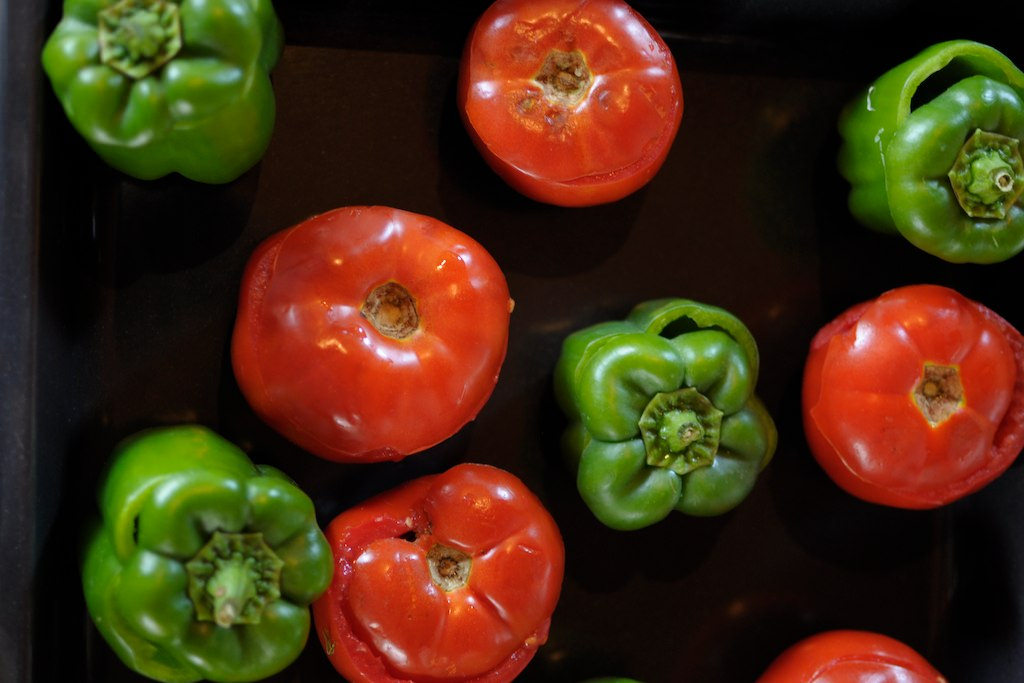 *Jemista is a fantastic vegetarian Greek recipe.
Slow cooking with lots of olive oil in combination with the vegetables juices creates a beautiful tasty sauce. The Greeks always serve bread with their diner, so they can dip it and not a drop of the sauce is wasted. 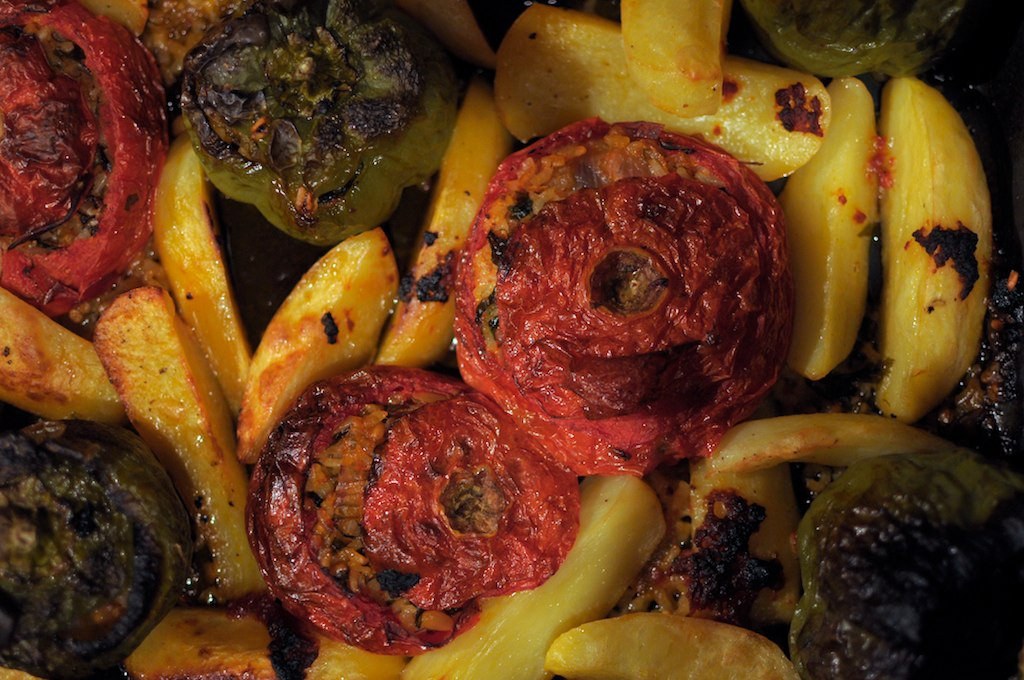 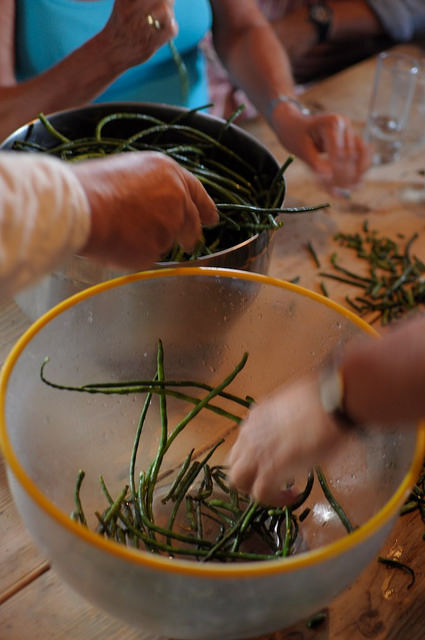 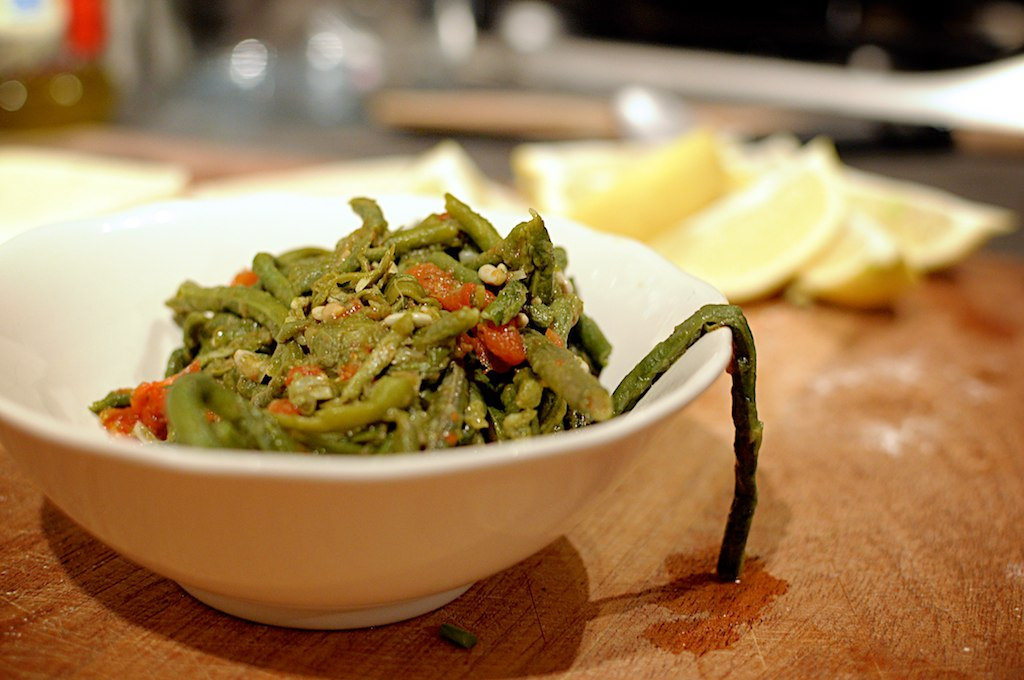 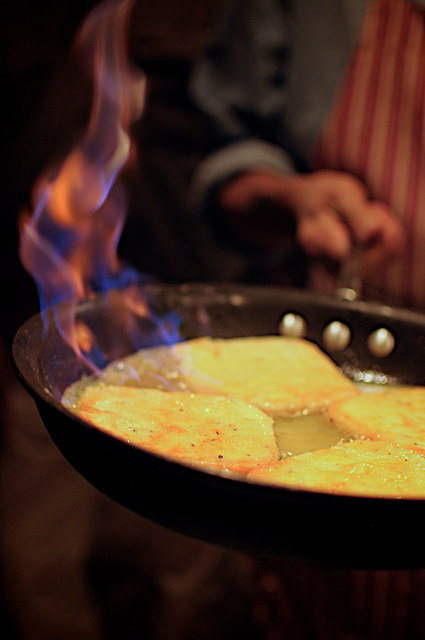 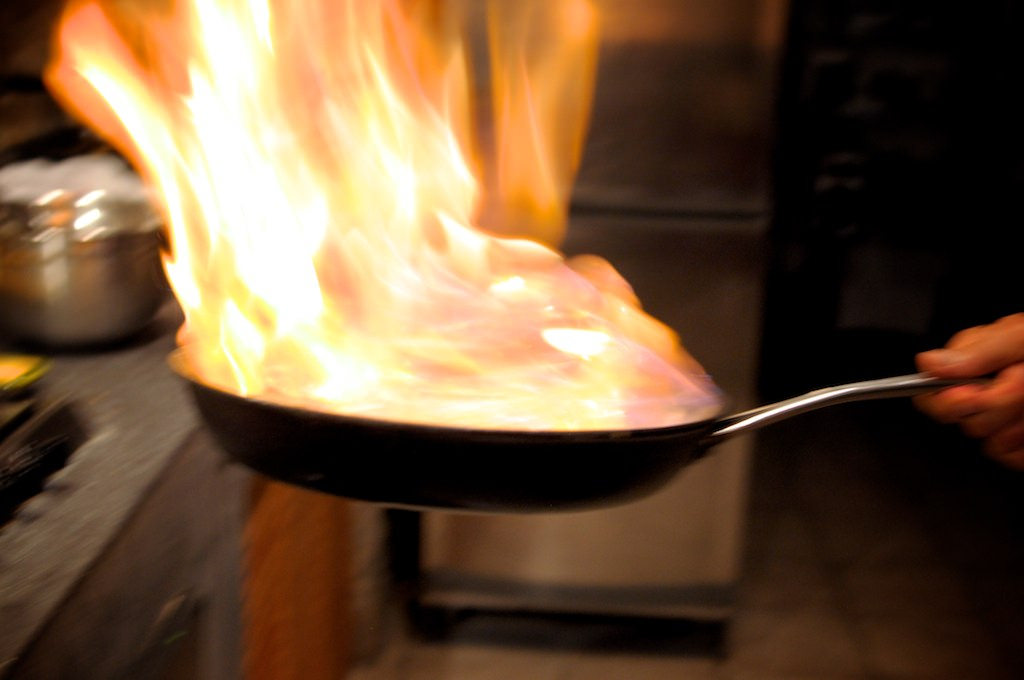 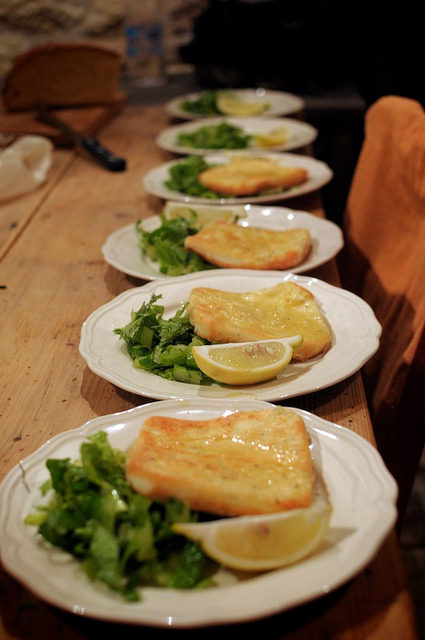 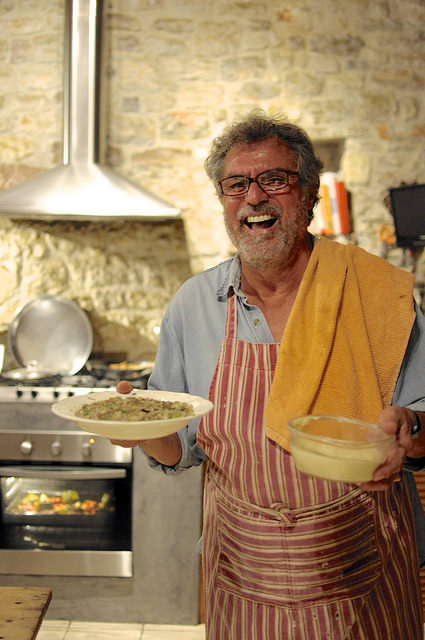 Now Takis has his own kitchen, professional tools and an oven he know’s inside out. He cooks Greek food with a twist for and with you. You can help as much as you want and he will explain everything with a smile and a joke. You will enjoy a fantastic evening. 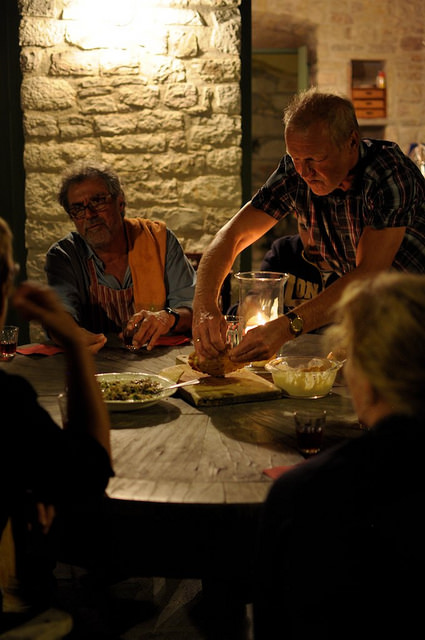 Price
15 euro per person with a minimum of 60 euro + the costs of the ingredients. For larger groups he can make a special arrangement.

Bookings
On request, during the day or in the evening. For more information call Takis on his mobile 0030 6938 000 235 or sent him an e-mail takvas1951@windowslive.com

The pictures are made by Alva, October 2014, Viaradika, Kythira. 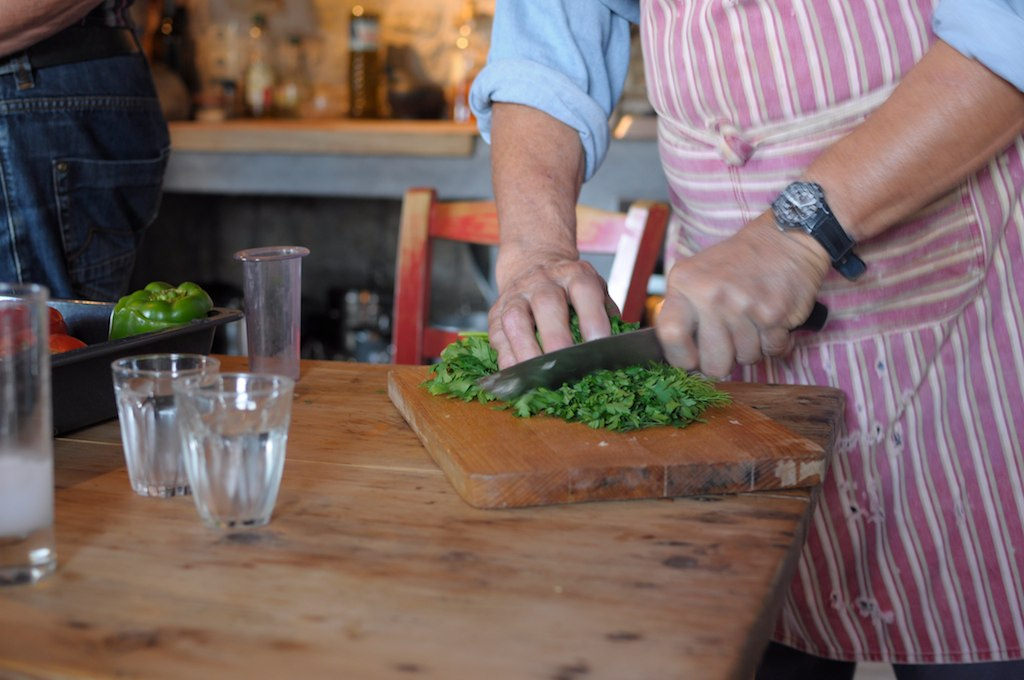